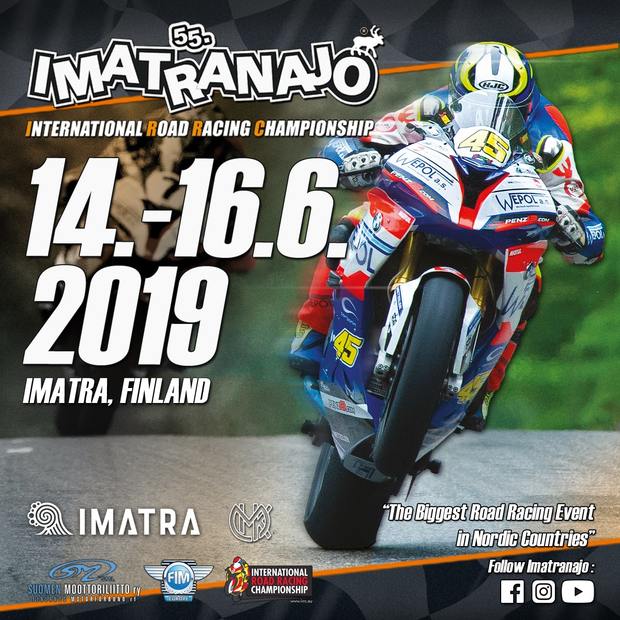 Although the 55th Imatranajo is months away, the organizers busy making arrangements for next year’s race.

The headlining classes in 2019 will again be IRRC Superbike and IRRC Supersport. Also familiar from previous years are supporting Open 1000 and Open 600 classes. In addition to those, Sidecars will make a comeback and as a newcomer, Retro Superbike class for pre-2000 machines, which proved hugely popular in Finland in 2018, will debut in Imatra. The final class is still unclear as Motorclub Imatra is trying to a historic GP bike series, ICGP, race meet to be a part of the 2019 Imatranajo. If the ICGP plans don’t work out, Lightweight class will race as the 7th class, so the track is sure to be full of action during the whole weekend.
– By extra classes we aim to ensure that there’s constantly something going on at the track, says Motorclub Imatra’s CoB Sami Backman.

At the same time started ticket sales for Imatranajo in the Ticketmaster service. As a Christmas present to racing fans, Motorclub Imatra offers weekend tickets at a discounted price of 35 euros (price at the gate 50 euros). In addition to the weekend tickets, the day ticket sales have also started. As a novelty for 2019, Friday’s practice sessions are free of charge for spectators.
Grandstand and VIP ticket sales will start by the MP 19 Motorcycle show, in the beginning of February.

Open 1000
Permitted are 4-stroke motorcycles, based on production models and compliant to the Superbike regulations. Maximum capacity for 3- and 4-cylinder engines is 1000cm3, and 1200cm3 for 2-cylinder engines.

ICGP
Permitted are motorcycles built before 1985 and equipped with an engine with a 250cm3 or 350cm3 capacity. The motorcycles must be purpose-built for racing and using motorcycles converted from road bikes is not allowed.

Retro Superbike
Permitted are 4-stroke motorcycles, based on production models and built before the year 2000. All assisting electronics are forbidden. The newest bikes, up to 2000 have a maximum capacity of 750cm3 for 4-cylinder engines and 1000cm3 for 2-cylinder engines. Up to the model year 1988 the maximum capacity is 1100cm3 and up to 1980 1000cm3.

Sidecars
Permitted are sidecars equipped with a 4-stroke engine. The maximum engine capacity is 1000cm3.